You are here: Home / Gadgets / How to Set Up Google Chromecast with iOS Device

I’ve been thinking for some time what is the best streaming device that fits my budget.

I chose Google Chromecast because I like Google in general but will I like it’s streaming device?

You’ll find out soon along with the tips I discovered as I go through the challenges all in the name of binge watching . . . and educational pursuit (so not to feel guilty).

This is what the box says about Google Chromecast:

Simple setup: plug into an HDMI port and connect to Wi-Fi.

This will only take about 15 minutes. NO. Make it 10 minutes. I followed the “Getting started;” anyway it’s plug and play. Right? 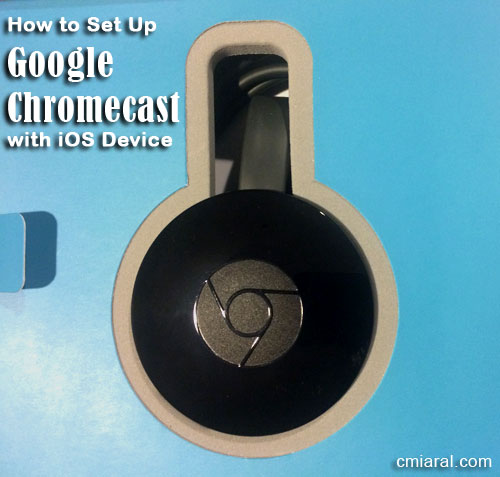 How to Set up Google Chromecast

The instructions are verbatim copy of the manual.

Five steps away from streaming your favourite movie.

That’s what I thought but I was stuck in step #5.

The Problem in Installing Google Chromecast

Did I say 10 minutes? Multiplied to three or more, that’s how long I had to figure out how to install Google Chromecast.

So here’s the scenario.

I used my iPhone then iPad. I browsed http://chromecast.com/setup on Safari and Chrome to no avail.

(Don’t bother counting the time. My eagerness to watch was depleted. SOS!)

What would you do if you cannot set up a product of Google? Well, ironically, I used Google (search engine) to search “How to set up Google Chromecast?”

I didn’t find direct answers other than the procedures similar to the manual.

But out of frustration and online sleuthing something lights up in my head.

The Fix: Set Up Google Chromecast with this Trick

Here’s the solution I should have done before following the manual:

This was the simple trick. Visiting the link http://chromecast.com/setup didn’t help me at all.

After I plugged in the Chromecast and turn on the TV, I opened the app and proceed to “add device.”

Finally, my phone was casting a TED talk on the TV!

I installed the app both on my iPhone and iPad.

My frustration has vanished at this point. I was busy looking for apps on which I can watch free online shows and movies:

OK so we may not have the same interest; fortunately, Google redeemed itself with the list of apps you can install and cast through Google Chromecast.

From games, news, to music, there are lots of choices that you have to check the available storage on your device.

Indeed, Google Chromecast is easy to set up if done the right way.

Even the device that doesn’t have a Google Home installed can cast shows on the TV that I have to unplug it when not in use.

Although I had difficulty in the set up, I like how easy it is to cast shows especially from YouTube.

But I’m not keeping my Chromecast. My equally nerd sister is happily waiting for it.

Why a sudden change of heart?

I like the device per se but not the process.

I don’t like to constantly download an app since my device has limited storage that is mostly occupied by photos. (No, not selfies. My favourite subjects are nature and architecture.)

In the future, I would like to use a streaming device with remote instead of my mobile device. And if I had any trouble again, I’ll definitely write about it.

What about you, how are you able to set up Google Chromecast? Any favourite apps or shows? Leave a comment.